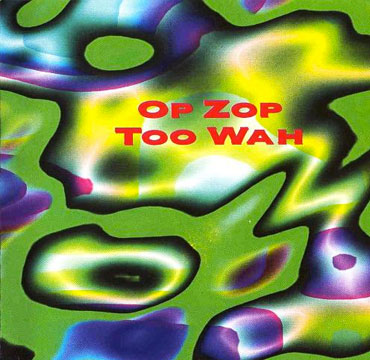 the original name for the record was On. the cover would have had a close up of some sort of interesting on/off switch. but just a few weeks before finishing the record I went to tower records and saw there was a new release coming from an english band I had never heard of. and their record was called On.

the phrase Op Zop Too Wah comes from an extended run of nonsensical words my friend Mike Wilshire and I concocted in study hall in high school one day. mike was the original bassist in the Denems. a few years after high school mike moved to Virginia Beach and took up the ministry. I hadn’t heard from him for 30 years when suddenly he called one day. I answered the phone and he immediately recited our nonsensical diatribe! would you like to read it? here it is:

the artwork is made up of 7 of my earliest attempts at digital painting. I used an early version of Kai’s Power Tools to create them.

this record began a 10-year tenure (see what I did there?) with Ken Latchney as my recording engineer. the first song we recorded together was Something To Do. for 10 years ken was there almost everyday of our lives whether we were recording or touring. ken was a perpetual grouch bag but a lovable one. I would be in the recording room, he’d be in the control room, and I’d play something I was excited by. then I’d ask through the talkback mic, “how was that?!” the inevitable low-keyed reply would be, ”…..eh,….it was alright.”

one thing that sets this record apart from others is the production/arrangement aspect. you may remember my explanation for FLUX is that I had the idea for a new way to organize music and sounds while on tour of france with david bowie in 1979. I continued to think about how that could be accomplished year after year until finally in 1996 I decided to try something. Op Zop is the prototype of FLUX without the ability to be “never the same twice.” the best I could do at the time was to have quick snippets between songs, songs that would be short or cut short only to appear again later, a big dose of sound effects, and surprise transitions with some tracks running into the next. it’s the production as well as the material that made this record so special to me. even today it is one of my favorites.

the record opens with the sound of my guitar through a foxxtone machine, one of my favorite sounds I have used many times. the volume is turned back on the guitar until just before the bass and drums come in, when I quickly turn the volume all the way up and it becomes a full-throated scream. a fitting beginning. the drums are a combination of east indian samples and real drums. the bass is the “cello bass”(picture one). occasionally the electric coral sitar drones (picture two). the vocals are meant to sound like an early Cream song and the type of lyrics were inspired by Bob Dylan’s All Along The Watchtower. those choices were all intentional. my original foxxtone, (picture three) a fuzztone that is actually fuzzy!

during the making of the record there was a 4-day period where everyone would be absent. my family on vacation and ken visiting his parents left me in the house/studio alone. before ken left I had him set up the means for me to record myself drumming (with a slight bit of flanging for the sound I wanted.) for 4 days I did nothing but play drums (picture four). practicing to get myself up to speed, I would sometimes record sections of soloing. by the time ken returned I had several performances I was happy with and chose one for Word Play Drum Beat. for lyrics I recorded friends of mine saying single words suggestive of violence. someone says “pipe”, I add “bomb.” someone says “hair”, I add “trigger.” so my word changed the meaning of their word.

then comes a quick flurry of snippets: my GR-700 playing itself, train cars coupling, and a british woman saying “what is that?!”

I bought my first vintage guitar, an orange 1962 Gretsch 6120 Chet Atkins Nashville double cutaway in perfect condition. (picture five) beautiful. when it arrived I opened the case and immediately started playing what would become the song Six String. I’ve always said that song was left in the guitar for me to discover. when I wrote it I made the lyrics sound like they were about a woman, but they were about my love of playing guitar. “I love it best when I run my fingers down her neck.” in particular I enjoyed playing the country licks on the gretsch.

then comes another snippet of me playing cello interrupted by someone knocking on the door.

I was once given a very nice big-bodied jazz guitar, so naturally I wrote a short piece with chords that are jazz-voiced and called it Conversation Piece. it goes by quickly.

so you see by this point I’ve established the “anything goes” attitude both Op Zop and FLUX embody.

parts of the lyrics from All Her Love Is Mine will end up in King Crimson’s Power To Believe record 7 years later. “she saved my life in a manner of speaking, when she gave me back the power to believe.” I’m not sure whose idea it was, maybe robert’s? anyway it’s a beautiful sentiment.

speaking of King Crimson the song I Remember How To Forget was offered to the band when we first rehearsed the double trio. I played a demo of my “single trio” version and the band began learning it but eventually I asked to have it back

I know that sounds nutty and I was very sorry it worked out that way, but I simply thought it was too much with twice as many instruments. in the end I used that same “demo” as the finished version. what propels the song is the drumming being in a 12/8 shuffle feel against all the odd time signature parts the bass and guitars play. I like the ending string section which was played on the Roland GR-1 guitar synth.

track 7 What Do You Know (part 1) is the first of the songs which get cut-off mid-stream so to speak. it is meant to surprise you when it returns again as track 11. this is an important device used often in the FLUX concept, but it just so happened in this case I just didn’t like the chorus I had written so I decided to stop the song after one verse.

the Roland GR-50 allowed you to put a different sound on each string. assigning different orchestral sounds across the guitar provided an interesting way to create a kind of big band horn arrangement for Op Zop Too Wah. I like the cello bass throughout and I’m especially fond of the “laughing jungle bird guitar” at the very end which is done by scratching the strings with my fingertip.

A Plate Of Words:

“shakespeare picks at a plate of words

pablo picasso’s at the bottom of the sea

painting all the fish in the coral reef.”

following such a promising start as that I ran out of clever rhymes. but it does make for a perfect bit of FLUX.

another song which almost suffered the same fate as A Plate Of Words was Time Waits. I first envisioned it as a short minute and a half song which surprises you by ending so soon. kinda like time does. but martha heard it and insisted it was too good to be so short and she was right. so I wrote and inserted a bridge and repeated a verse. much better that way.

after picking the notes of the opening chords Am6 Fmaj7/A Am add9 B7, the glorious abbey-road-like chorale harmonies introduce the final verse of What Do You Know (part 2), which is soon cut off by a count off of 1, 2, 3 and some background noise I recorded from a short wave radio which then launches into…

Modern Man Hurricane Blues. features more of Word Play Drum Beat drumming over a dobro figure in 6 and a raging fuzz bass. a crazy trio if there ever was one.

an actual recording of the small waterfall in my backyard replete with the birds I feed opens In My Backyard. I have always incorporated real life into my music whenever possible. this is short and sweet, a simple vocal, simple sentiment, my 1962 vintage Gretsch, and a bit of whistling.

next comes a 42-second musical reprise of A Plate Of Words (now titled A Plate Of Guitar), a few more seconds of short-wave radio noise straight into another quick song Live In A Tree about the stress of modern life. once again demonstrating concepts of FLUX.

I tried in Something To Do to affect my voice as a frail non-singer for the verses to help the light-hearted nature of the lyrics. I love changing up my voice for different types of songs.

Beautiful is as advertised, utilizing the sound of the ocean, swelling cellos, the ‘62 Gretsch with its mute engaged, and my real singing voice. as pretty songs go it’s overlooked, but a personal favorite.

then some strange shocking whooshing sound edited into me playing a cello line, turns into an alarm clock and then into a high energy guitar romp.

I’m very fond of the concept of High Wire Guitar. imagine there’s an electric guitarist making his precarious way across a high wire, like in the circus, but his “death defying feats” are what he plays on guitar! he goes for an extended run up the guitar neck! the audience roars approval! then he attempts a fast lick and, “Ooooooh”, he barely made it! “look out!” he nearly dropped his pick! the recorded solo was played once, first take, with an altered tuning I created for the Roland VG-99.

I have no idea what the audience is laughing about at the end.

only the most astute of listeners will realize the title Sky Blue Red Bird Green House is not what I actually sing. in the song I sing red WOOD. talk about trivia!

the guitar (picture seven) is the rare Fender Santa Rosa which I keep tuned to the Nashville tuning. the log drum (picture six) is the one Bill Bruford recorded Sheltering Sky with (and the same one he played live). now there’s some real trivia!

there is truly not a sadder song I have written than The Ruin After The Rain, considering the very personal tragedy it was written about. not something I care to reveal. I don’t consider myself much of a pianist, this is about as good as I get. it was played on my trusty old Howard (picture eight) from the days of Mr. Music Head. howard still resides in my living room. the choruses are filled out with horn sounds from the GR-700 and chords on the dobro. and of course a splash of rain at the end.

the original title track On, is built around a simple repetition of 4 chords: A A7 Am7 G6. the production idea was to keep changing the elements going along with the repetitive chords. the drums, bass, and other things change as the song moves along.

the surprise “hidden track” that comes after the record is over is a missing section from What Do You Know.

as has become the norm by now, I play, sing and produce everything on the record.

Op Zop Too Wah was released september 24, 1996, one year after Guitar As Orchestra and Thrak. 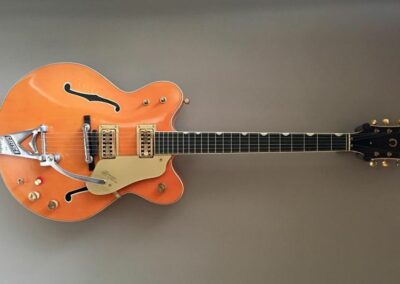 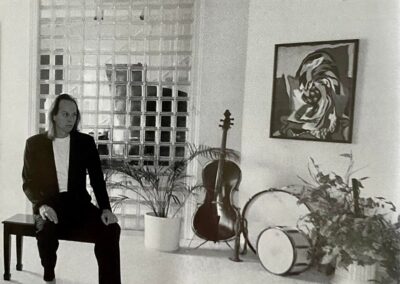 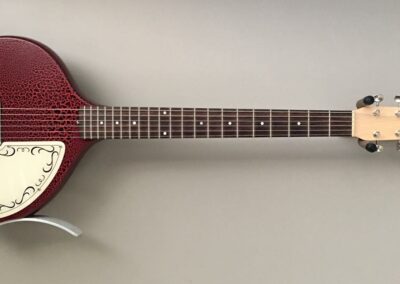 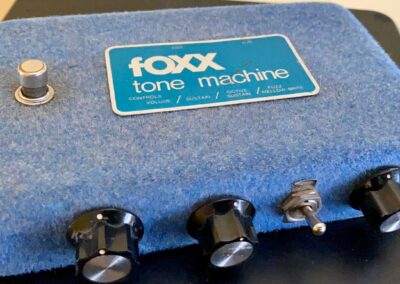 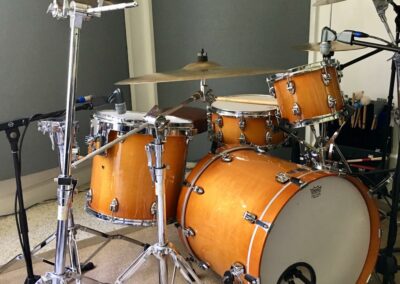 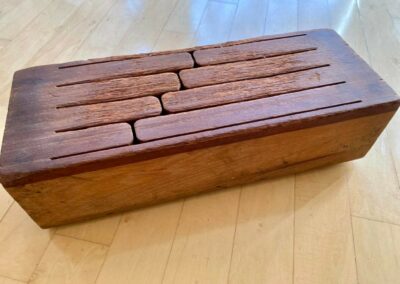 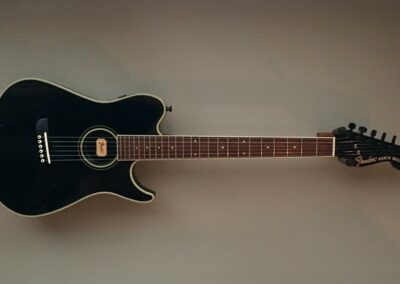 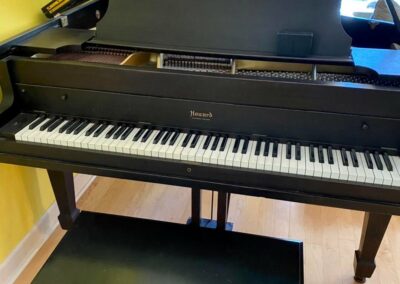