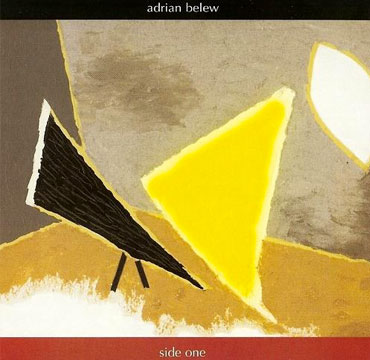 not having listened to the Sides for quite a bit, I was nearly knocked over by the ferocity of the first 3 tracks, thanks in large part to the brilliance of Les Claypool and Danny Carey. wowee! I couldn’t have asked for more! Ampersand and Writing On The Wall have been staples of my concerts for years now and to hear the original versions again was a real treat for me. I love what the two of them added.

the creation of this material began when I started using a looper as a writing tool. over time I realized the advantage a looper would give me in a live trio and began writing and producing songs with a trio in mind. my friend Whit Hubner is the one who suggested I reach out to Les and the result was 5 terrific tracks for the Sides: 3 on Side One, 2 on Side 3.

to work with les and danny I felt it was easier for me to go to them so it was decided to move into les’s studio Rancho Relaxo at his home in northern California wine country, Sebastopol for a week of recording together. and what a wild week it was! les has some impressive friends. (tom waits lives next door but was not in town at the time.) one of les’s friends is a brilliant man named Larry Brooke who is the founder of General Hydroponics. he has a beautiful home and is a wine connoisseur. a fascinating guy who loves to entertain, his living room is set up with instruments for jamming. most of our evenings were spent at larry’s. we recorded at the rancho in the daytime, jammed at larry’s at night. (the jams were not recorded.) it was great fun.

I brought finished versions of the songs for les and danny to play on. all my parts were done beforehand at studiobelew. but we played the songs live together first to familiarize them with the arrangements and fine points. then they recorded together as a duet to my guitar tracks. fascinating to watch. les has his studio perfectly tuned to his tastes, which made everything sound awesome.

danny surprised me for Matchless Man. he had been taking tabla lessons!

at the beginning of Madness I play a lovely 49-second melody from the Gayne Ballet Suite by Katchaturian. I thought it was public domain and I had even credited it on the record but, oops! I was mistaken. after the record came out and it was too late, I was told I had to pay to use it! rightly so, but a costly 49 seconds. still worth it.

during the making of the Sides I was using a Johnson amp, one of the first “modeling amps” which contained wonderful effects. I wrote numerous unusual programs with it. for Madness I was able to make it play two different guitar parts at once. one part was what I was actually playing, the other was backwards and in a different key! it is truly controlled chaos and one of my favorite sounds. I remember being so excited by it! later I used the same idea for “b” from the “e” record, but by then I had learned how to control it. (somewhat ). the drums are VDrums and the fuzz bass is a Fender Jazz through a raging distortion. Gary Tussing played a cello line meant to bring relief from the chaos.

Walk Around The World is one of the most difficult guitar pieces I have written. to begin with it requires making a very exacting loop to play to (an odd loop in 6/8). the fast pace guitar part which runs throughout the song has to be played perfectly in sync with the loop and has to join the loop seamlessly in certain places. if I had to play it now, I couldn’t. it requires weeks of practice first. once again I played the VDrums. the bass is a fretless Fernandes.

around this time I began running my midi Parker guitars through a small Korg keyboard called the MS-2000. it had a limited vocabulary but could be programmed to do some very special things. for example, the whooshing spacey sound you hear at the beginning of Madness. I call that Radio One. the MS will appear often from here on in my descriptions.

Beat Box Guitar features 3 drum aspects: a side stick loop which plays almost throughout, the main drums which are VDrums for the first 3:50, and then a double-drumming tom tom pattern on my acoustic ayotte kit which takes over the remainder of the song. there are sundry events such as the electric insect sounds from the EH Echoflanger, backwards drum sounds, surface noise from a vinyl record, and slowed down cymbals. the bass plays mostly a repetitive line with a muted sound until the guitar solo. guitars include a reverse wah wah loop and a clean melody at times triggering either a MS-2000 horn section or MS-2000 electric piano sound. the soaring guitar solo at the end is just, well, a bit soaring.

Beat Box Guitar was nominated for a Grammy. it was very nice to be honored. you need the support of a size able record label to be nominated, which leaves me pretty much ineligible these days since I put out my records on my own.

it’s been said my solo work has been underrated, even overlooked. in some ways I might agree, but mostly not. still I decided to voice the issue in these words:

“in the hissing airwaves

if you listen carefully

you can understand my fate

to be stranded on the stairway

musically Under The Radar is a mix of slowly unfolding keyboard and guitar sounds accompanying a simple two-chord guitar pattern. and my disconnected voice.

Elephants, yet another tirade against their abuse, features a fitting elephantine guitar soloing over a chunky guitar loop. I still use this sound as one of my main heavy guitar sounds. in the background there are live jungle sounds, birds, ect.

Pause. the record ends with a quick bite of musique concrete guitar looping and keyboard sounds, mainly from a Nord Lead III. eventually it develops into a guitar and violin duet with me and Peter Hyrka playing the ending melody of the opening song of Side Two: Dead Dog On Asphalt. it closes with more Radio One from the MS-2000.

apart from Les Claypool on bass, Danny Carey on drums and tabla for Ampersand, Writing On The Wall, and Matchless Man, Peter Hyrka played violin on Madness and Pause, Gary Tussing played cello on Madness, and Ian Wallace was the voice of the BBC in Elephants. I played and sang everything else.

with Side One I began using my paintings as the artwork for my records. the “house on fire” painting was the first one I ever did using only palette knives. 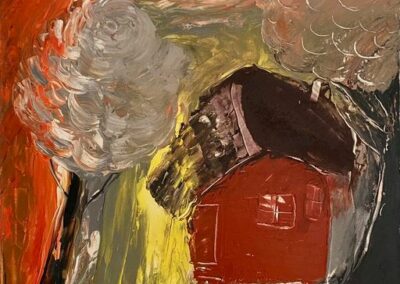